The Eclipse of the Demos

The Eclipse of the Demos: The Cold War and the Crisis of Democracy before Neoliberalism (University Press of Kansas, 2020).

As democracies today are showing alarming signs of erosion, scholars and pundits alike speak of a “crisis of democracy.” While many blame the dissolution of the welfare state and the rise of neoliberalism since the 1980s, I suggest that the current debate on the crisis of democracy can benefit from a longer historical perspective, particularly from a close look at the transformation of democratic theory in the post-World War II era. Under the pressure of the Cold War, three constitutive motifs drawn from disparate intellectual traditions—fear of the masses, faith in rational systemic management, and an embrace of capitalism as a correlate of democracy—converged to redefine democracy as an instrument for advancing individuals’ private interests rather than a public institution that organizes power in a distinct way. In instrumental democracy, the idea of the demos—equal members of a body politic who judge competing public claims according to the principles of political equality and the common good—is rejected, and citizens’ indifference to public claims that do not affect their immediate welfare is naturalized. The displacement of the demos during the Cold War, I argue, undermined democracy from within, preparing the way for neoliberalism’s ascendance. 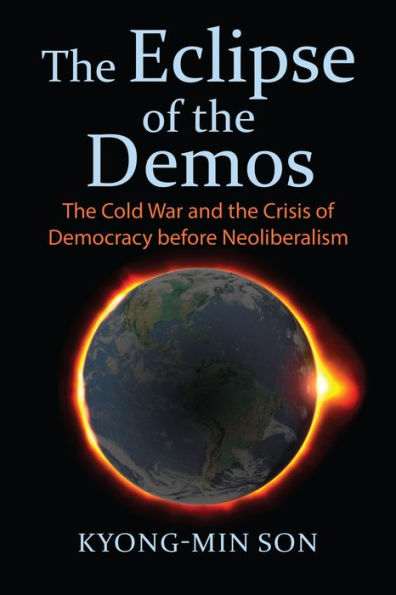 “The Eclipse of the Demos offers a striking account of the current fate of democracy in the North Atlantic world and puts paid to presentist accounts of neoliberalism and right-wing ascendance. By focusing on the distinctive contours of Cold War democratic theory and practice, the book sheds light on the historical trajectory of liberal democracy and how it relates both historically and conceptually to neoliberalism, while carefully contextualizing current modalities of democratic disaffiliation. Written with audacity and erudition, Son’s book constitutes an important contribution to an accurate and sober understanding of the current travails of democracy.” Antonio Y. Vázquez-Arroyo, author of Political Responsibility: Responding to Predicaments of Power

“The critique of democracy by neoliberal thinkers like F. A. Hayek is often treated as a scandal, a basic sin against the ideology of the free society. Yet Kyong-Min Son’s illuminating book shows that skepticism about democracy ran down the mainstream of scholarly conversation after 1945. There was no Golden Age. To understand the challenge to democracy posed by neoliberalism, we must reckon with the entire postwar period.” Quinn Slobodian, author of Globalists: The End of Empire and the Birth of Neoliberalism